Relationships, Seth Godin, And A Slice Of Pie 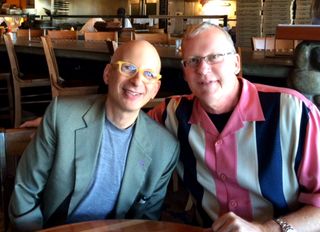 My day began quite pleasantly like any other.. up at 5, a home brewed dark roasted cup of Starbucks, and a read of the morning paper. The early morning sun was just starting to spill through the french doors, and the birds were beginning to stir when my wife joined me in the kitchen. It was a few minutes later, over coffee, that she shared the email from Seth Godin.

For many years I have followed Seth, purchased his books, shared his blogs and generally, admired his genius. His critical thinking and philosophic like approach to small business has influenced my own perspective to push the envelope, work with passion, ask why, live a life with balance, and more. As my wife pursued her own passion for writing, she too, became an ardent fan. Recently I learned that Seth would be visiting Phoenix, and well... she did, what she does. She used her words.. rather effectively. And so a meet up with Seth Godin was in the works.

Those who know me well know I am rather obsessed with pizza, in a professional at home pizza chef kinda way, so his suggestion for a meet up at a gourmet pizza place I haven’t yet tried seemed like serendipity.

And so, I shlepped Seth’s big book from it’s altar at the office to the dining table in the restaurant, and I waited- and right on the dot, Uber delivered him to me.

Recognizable as always, it was a regular guy that sat down beside me. Relaxed, gracious and like two “ regular guys” from the East Coast, we began to talk. We began with incidentals, and progressed to talk of family, complete with iphone pics. We talked about busyness and balance and lessons learned in life.

“What’s your story?” Seth asked me, and unsure where to begin I hit the highlights of neighborhoods and the Navy, education,  25 plus years of entrepreneurism and more. Later my wife asked me- “ did you talk hobbies?” Raising my eyes, I just looked at her somewhat startled- “ you know..” she continued.. “ that you drive a motorcycle, fly a plane, fly fish and stuff..”. Well, no I didn’t, but somehow we talked about what mattered, struck a chord, and he generously, shared himself with me.

We talked about the struggle of technology and adaption, and how technology so often advances beyond the users comfort zone and ability to adapt. We talked about speaking and travel and even the promotional products profession.

“ What’s Next?” I asked Seth.. the implication clear we were talking the next big thing...
“ Relationships” was his confident and effortless answer, I considered this for a moment, as we ate our dinner side by side. Relationships, indeed.

Sharing a  meal with such a brilliant guy, it could have been tempting to look for , or even ask for a tidbit of advice an  “If you were me..” type of question, but I didn’t , because that wasn’t my agenda. I don’t have a dilemma, a burning need and more importantly, I wanted us to be what we were-  just two guys talking and sharing ideas.

Seth’s zen like approach to sharing his words is calming, motivating and even.. uplifting, it is his minimalist perspective on marketing that is so very powerful . While we sat, Seth took a pen from his bag, and signed his big book I brought,  with a flourish, filling the full page with his scrawl.

Later when I was alone, I opened the book to that page, realizing that in fact he did have a specific suggestion of encouragement for me, advice of sorts that although it could be called his motto,  is also undeniably me... “ For Bruce.” Seth wrote, “ Make Your Ruckus.” 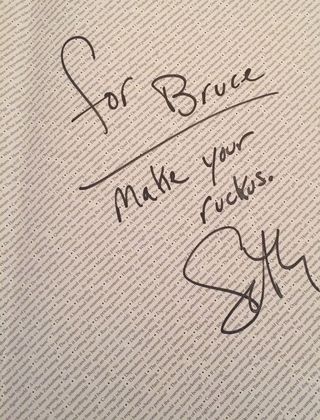 The comments to this entry are closed.

Promote Your Page Too